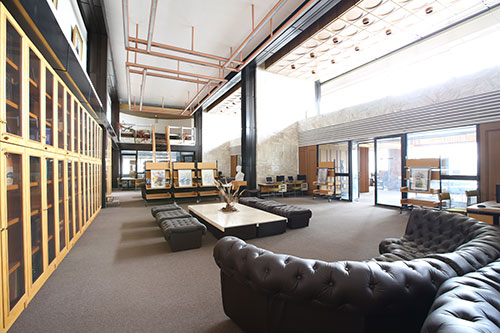 The library was created in the difficult postwar years. In 1948, the first books and magazines from the private collections of leading therapists of the country G.F. Lang and A.L. Myasnikov appeared on its shelves, which served as the beginning of the formation of the library funds. At the moment, they have about 250 thousand units of storage. These are book and periodical domestic and foreign publications, dissertations, educational and methodical literature, publications on modern media. In 1982, the Cardiology Center moved to the new buildings of the complex. The scientific library has received significantly larger areas and new technical capabilities for servicing readers. The library and its reading rooms are visited not only by employees of the cardiac center, but also by specialists and students from other scientific, medical, educational institutions of Moscow, the Russian Federation, and also from other states. Since 1983, the Cardiocentre Library, the first among medical academic libraries, has begun working with foreign data banks in the field of biomedicine and today has all the modern technologies for quickly obtaining information in a specially equipped Internet class. At present, the local library network has been expanded to the entire cardiological complex. The conclusion by the scientific library of licensing agreements for working with foreign information resources allows its researchers, doctors, graduate students and residents not only to maintain their scientific knowledge at the world level, but to a large extent outpace their colleagues from abroad. Cooperation with universities and medical institutions from Europe and America allows to significantly increase the library's funds through active book exchange. The Scientific Library has been an active member of the Russian Library Association since 1997. As part of the program of development of the all-Russian information library computer network "LIBNET", library specialists are working on the development of the program in the field of cataloging for the exchange of information on machine-readable media at the national and international level. Particular attention is attracted by the collection of books of the XVI –XIX centuries. To the 60th anniversary of the Cardiocenter, the library staff made an album-catalog “Collectanea Medica”. The published edition reflects the most interesting folios of this part of the book storage, where bibliographic descriptions and historical chronicles are attached to each source. Since 1984, all employees, patients and guests of the Cardiocomplex can visit its art gallery, where works of contemporary artists are exhibited. Considering the 30-year-old age of the cardiocomplex buildings, which led to the technical deterioration of premises and communications, the scientific library needs construction work. The constant increase in the library stock entails the need to restore the existing shelves, as well as their partial replacement with more modern and compact ones. The Scientific Library of the National Medical

Research Center of Cardiology occupies a leading place among the medical libraries of Russia and the CIS countries.

The library was created in 1948. The basis of its funds were books and magazines from private collections of outstanding therapists G.F. Lang and A.L. Myasnikov. Library funds are constantly increasing, and today there are more than 200 thousand units of storage. These include dissertations, domestic and foreign books and periodicals. The collection of books of the XVI-XIX centuries attracts special attention.

The library has all the modern technologies for efficiently obtaining scientific information in a specially equipped Internet-class.

One of the halls of the library is intended for exhibitions of contemporary art.