The history of the National Medical Research Center of Cardiology is not only a chronicle of the emergence, formation and development of cardiology in our country, but it is also a big and important chapter in the history of medical science in the Soviet Union and Russia. The post-war 1945 is the year of victory and the beginning of the country recovery after a hard struggle against fascist aggression.

In April 1945, the decision was made to open the Institute of Experimental and Clinical Therapy, as part of the newly formed Academy of Medical Sciences (AMS) of the USSR, designed to solve the multifaceted problems of internal medicine. The well-known therapist, academician of the Academy of Medical Sciences, V.F. Zelenin, was appointed as a director of the Institute, but his leadership was limited to three years and left no significant mark in the history of Soviet medical science. The situation changed with the arrival to the Institute of Therapy of A.L. Myasnikov, academician of the Academy of Medical Sciences, a relatively young but already well-known, talented scientist who focused his research on two main areas - hypertension and atherosclerosis. The possibilities of A.L. Myasnikov were limited by the size of the Institute and its staff capabilities. Despite this, the Institute became the leading institution in the Soviet Union studying the problems of cardiovascular pathology. Most of the works were priority for the USSR and were conducted at the level of international studies. With the relocation of the Institute of Therapy to Petroverigsky Lane, new opportunities have appeared for creating new departments, experimental and clinical laboratories. Among the most important areas of research were: coronary circulation and its regulation, renal circulation and hypertension, central mechanisms of hypertension, mechanisms of cerebral circulation regulation, contractile heart function, heart mechanoreceptors in normal and ischemic conditions, stress and blood pressure regulation, cellular electrophysiology of the heart and arrhythmias . 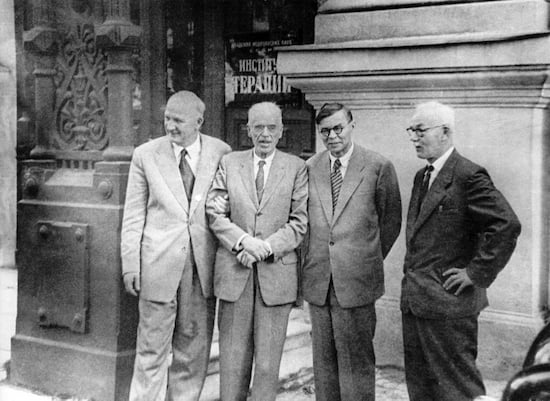 In the 60s-70s, research on the problem of atherosclerosis expanded significantly. At the same time, intensive research has begun on the problem of myocardial infarction. In 1963, for the first time in the country and one of the first in the world, a specialized Department for the treatment of patients with acute myocardial infarction with intensive care unit was established (Ye. I. Chazov and staff). But the most important achievement, recognized worldwide, was the creation of a fundamentally new method of treatment - thrombolytic therapy. On June 5, 1975, in the emergency cardiology department, for the first time in the world, the patient underwent thrombolysis using intracoronary administration of fibrinolysin at a dose of 10 times less than with intravenous administration. A further important stage in the development of thrombolytic therapy was its use during myocardial

infarction at the prehospital stage by cardiology emergency medical team. Simultaneously with the introduction of thrombolytic therapy into practice, the Institute developed a system for the rehabilitation of patients after acute myocardial infarction. Since the early 60s, studies have been conducted on chronic ischemic cardiovascular disease.

After the sudden death of A. L. Myasnikov in 1965, his student (then Professor E.I. Chazov) was appointed directo AL Myasnikov r of the Institute of therapy. In 1966, the Institute of Therapy was renamed to the A.L. Myasnikov Research Institute of Therapy, and in 1967 to the A.L. Myasnikov Institute of Cardiology. After E. I. Chazov was appointed head of the IV main Department at the Ministry of health of the USSR, Professor I. K. Shkhvatsabaya became a Director of the A. L. Myasnikov Institute of cardiology. During this period, the possibilities of diagnosing and treating secondary forms of arterial hypertension were widely studied. There was also an experimental laboratory of cardiac electrophysiology, together with the Institute of Pharmacology of the USSR Academy of Medical Sciences, two antiarrhythmic drugs, etmozin and etatsizin, were created. One of the first in the country began to carry out artificial pacemaker implant surgery. Later circulatory physiology and the physiology laboratories of the heart were opened. These laboratories still exist and are merged into the physiology department of the Institute of Experimental Cardiology. An important event for cardiology (both science and practice), was the emergence of echocardiography method. Yu.N. Belenkov was an enthusiast of developing and introduction the method into wide practice. The first clinical echocardiographic study was performed on May 16, 1973. In the future, the method of ultrasound examination of the heart rapidly developed and opened up truly invaluable possibilities for non-invasive diagnosis of heart defects, cardiomyopathies, and evaluation of the functional state of the heart and blood vessels. In 1975, according to the decree of the Council of Ministers of the USSR, the A.L. Myasnikov Institute of Cardiology became the All-Union Cardiological Scientific Center of the Academy of Medical Sciences of the USSR. 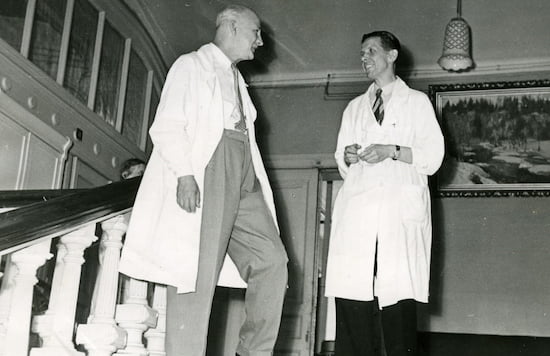 In 1984, a modern cardiac surgery department was opened, headed by Professor R.S. Akchurin. The domestic cardiological science won the recognition of foreign colleagues, an indicator of which was the holding of major international scientific events, in the organization of which the leaders and employees of the All-Union Cardiological Scientific Center actively participated. Another important event of the 80s was the flight into space of O.Yu.Atkov, an employee of the Cardiology Center, who spent 247 days aboard the Salyut-7 space station, carrying out complex scientific research, including using the domestic ultrasonic device "Argument" developed with the participation of scientists of the Cardiology Center. In 1988, the Institute of Preventive Cardiology was removed from the All-Union Cardiological Scientific Center, which was transformed into the Center for Preventive Medicine.

In 1992, fundamental changes began in the life of our society.

The All-Union Cardiological Scientific Center renamed to the Cardiological Scientific Center of the Russian Academy of Medical Sciences, and then to the Russian Scientific-Production Complex of the Ministry of Health. The powerful scientific and clinical potential accumulated in previous years continues to realize itself. The Cardiological Center has retained its leading position in cardiology throughout the post-Soviet space. At the moment, the Center continues intensive research in almost all major areas of cardiology. In the Cardiological Center there are one and a half thousand employees who are devoted to their work, full of optimism, despite all the difficulties of modern life.