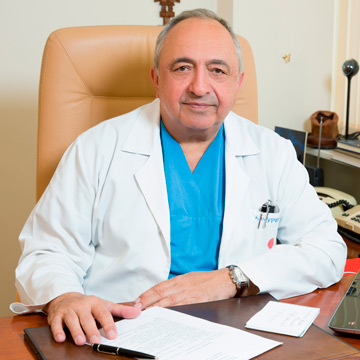 Head of the Department -
Academician of Russian Academy of Science, Professor Renat S.Akchurin

The Department of Cardiovascular Surgery was established on the basis of the Cardiological Scientific Center of the Russian Academy of Medical Sciences in 1984.

The structure of our department includes: a cardiovascular surgery group, a cardiological group, an anesthesiology and myocardial protection department, an artificial blood circulation laboratory.

Most often, operations are performed with cardiopulmonary bypass circulation. In the presence of postinfarction LV aneurysm, the removal of the aneurysm is performed, followed by remodeling surgery of the left ventricle. The ”gold standard” is to use the left internal thoracic artery (or two internal thoracic arteries, the gastroepiploic artery, the radial arteries) for autoarterial bypass grafting in combination with required number of autologous venous grafts. The development of special tools made possible to perform minimally invasive surgical interventions without cardiopulmonary bypassing through anterolateral thoracotomy in patients with an isolated lesion of the anterior descending artery.

In recent years, our department is involved in world development of the so-called “Off-pump - OPCAB” surgery (i.e., without the use of CPB circuit), which is especially indicated for elderly patients with multiple comorbidities.

II. Surgery for lesions of the aorta and major arteries

In Cardiovascular department, both emergency and planned reconstructive operations are performed on all segments of the arterial and venous segments, starting with the ascending aorta:

In our cardiovascular department were is a multiple options to treat patients with cardiac rhythm and conduction disturbances (sick sinus syndrome, disorders of atrioventricular conduction, atrial fibrillation with complete transverse heart block) and russian (ECS-500) or imported (Biotronic, Medtronic) artificial pacemakers can be implanted.

IV. Surgical treatment of congenital and acquired heart defects in adults Prosthetic valves (aortic, mitral) in adults with congenital or acquired pathology are performed using domestic models (Karboniks, МИКС), or double-wing valves from Sulzer Medica. Valve-preserving operations are increasingly being introduced into practice: mitral and tricuspid valve plastics (suture or with a ring) in case of their insufficiency, remodeling plasty of mitral chords surgery, commissurotomy for mitral valve stenosis. Successful operations are carried out to treat patients with atrial and interventricular septal defects, with abnormal drainage of pulmonary veins, etc.

V. Surgical treatment of patients with cancer and severe coronary artery disease One of the main fields of interest in our scientific program is the complex treatment of oncological patients with severe coronary heart disease. Successful experience of simultaneous and staged operations of myocardial revascularization and removal of tumors of various localization has been accumulated for last 20 years.

Annually, up to 400 operations with artificial blood circulation are performed in the OSSH, most of which are operations of myocardial revascularization.

The treatment includes the whole complex: from sclerotherapy and laser treatment (with small varicose veins, asterisks) to restorative microsurgery on the valves of the veins. Treatment of lymphatic edema and edema of another origin by the method of manual lymphatic drainage (special massage and a set of exercises in a compression elastic bandage), as well as a surgical method (microsurgical operations on lymphatic vessels).

The peculiarity of the intervention was the presence of a permanent pacemaker in the patient and absolute dependence on the artificial pacemaker. In this case, damage to the electrode when fixing the valve prosthesis could be fatal to the patient. In order to avoid the risk of damaging the stimulating electrode, a decision was made about the simultaneous operation of epicardial fixation of the stimulating electrode and the extraction of the previously implanted endocardial right ventricular electrode EX.

Patients who need to re-reconstruct the tricuspid valve (up to 40% in 10 years) are classified as high risk. However, the lack of surgical treatment has extremely adverse consequences for the patient. The situation is complicated by the presence of a previously implanted endocardial stimulation system with the installation of an electrode through the tricuspid valve bioprosthesis. There is a possibility of damage to the insulation of the electrode with the metal frame of the transcatheter endoprosthesis, especially in the mid-remote and distant postoperative period, and the development of such a complication in a stimulating patient is fraught with death.

Stenosis of a previously operated tricuspid valve defect is extremely rare. Until today, tactics for managing such patients is not clear. However, the development and active use of hybrid and X-ray surgical treatment methods in the department of cardiovascular surgery allowed our specialists to solve this difficult clinical situation.

In the department of cardiovascular surgery, all types of hybrid heart interventions are performed, and all types of heart rhythm disturbances are treated. New treatments are being actively developed and implemented.