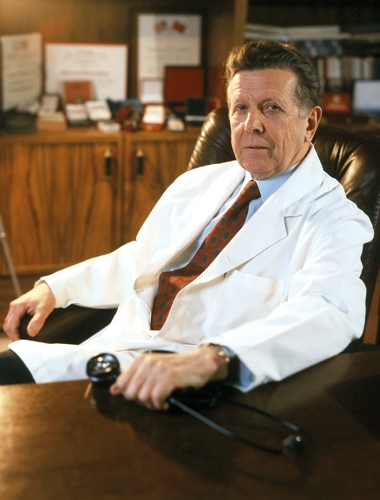 Honorary Director of the Federal State Budgetary Institution "Scientific Medical Research Center of Cardiology" of the Ministry of Health of Russia, Academician of the Russian Academy of Sciences Evgeny Ivanovich Chazov, Academician of the Academy of Sciences (since 1979), Academician of the Academy of Medical Sciences (since 1971), outstanding doctor, scientist, health care organizer and a public figure. After graduating from the Kiev Medical Institute in 1953, he was admitted to the 1st Moscow Medical Institute as an intern at the clinic of one of the country's leading therapists, academician A. L. Myasnikov. Here he was not only formed as a doctor and a scientist, but over the three years of work he prepared and defended his thesis. Since then, he has not left his medical practice, no matter what post he holds.

His medical talent is recognized not only in our country, but also abroad. He was awarded the gold medal "Outstanding Doctor" of the A. Schweitzer International Academy of Medicine, a special international prize "Golden Hippocrates", was elected an honorary member of many foreign medical societies, such as the American Heart Association, the Society of Cardiology of the United Kingdom, the Swedish Scientific Medical Society and many others. An outstanding scientist with a worldwide reputation, he has come a long way in science from a junior research assistant to the general director of the Russian Cardiology Research and Production Complex, created and built on his initiative. Priority research conducted by E. I. Chazov received international recognition. The thrombolysis method he created in the 1960s is widely used to treat patients with myocardial infarction, the safety of which he experienced on himself. The thrombolysis method has saved over the past years millions of lives of patients with myocardial infarction in many countries around the world. For the creation of highly effective thrombolytics, E.I. Chazov was awarded the Lenin Prize in 1982. E.I. Chazov and his staff in 1979, registered the discovery of the mechanisms of creatine phosphate pathways of energy transfer in the heart muscle, which is of great importance not only for understanding the functioning of the heart, but also for creating new drugs. In 1969, E.I. Chazov was awarded the USSR State Prize for the development and introduction into practice of the myocardial infarction treatment system, which included pre-hospital care, the creation of the first intensive observation units in our country, new treatment regimens. This system functions today, not only in Russia and the CIS countries, but also in foreign countries. Prevention and rehabilitation of patients with cardiovascular diseases, developed by E. I. Chazov and his students, is of great importance and can prevent the development of the disease and restore the working capacity of patients. The work was awarded in 1976 the second State Prize of the USSR. The international recognition of these achievements was demonstrated by the election of E. I. Chazov as President of the IX International Congress of Cardiology and of I International Congress of Preventive Cardiology. In 1991, for the third time, he was awarded the USSR State Prize for the creation of elements of special equipment. In 2004, E.I. Chazov, together with a group of scientists, was awarded the State Prize of the Russian Federation in the field of science and technology for the creation and introduction into practice of the new original antiarrhythmic drug "Nibentan". The range of scientific interests and research conducted by E.I. Chazov, which allowed to solve not only the problems of basic science, but also create new methods of diagnosis and treatment, is quite large. These include problems of heart rhythm disturbances and antiarrhythmic drugs, methods of treating ischemic heart disease and atherosclerosis, the role of brain function disorders in the formation of cardiovascular diseases, problems of myocardial metabolism and vessel wall. The results of all these studies are summarized in 17 monographs, many of which have been translated and published in the USA, Germany, Great Britain, Poland, Yugoslavia, and in 550 published scientific papers.

E.I. Chazov - Honored Scientist of the Russian Federation, Uzbekistan, Kyrgyzstan. His monographs were awarded nominal prizes of the Russian Academy of Medical Sciences - S. P. Botkin, N. I. Pirogov, A. L. Myasnikov. Under the leadership of E.I. Chazov, 38 doctoral and 59 candidate dissertations were defended. A well-known scientific cardiological school of Academician E.I. Chazov was formed. He is known not only as a doctor and scientist, but also as a health care organizer. For twenty years, along with scientific work at the Cardiology Center, E.I. Chazov headed the IV Main Directorate under the USSR Ministry of Health, creating a unique therapeutic and preventive association, where new approaches to the prevention, diagnosis, treatment and rehabilitation of patients with various pathologies were developed. He demonstrated his organizational skills during his work as the Minister of Health of the USSR in 1987-1990. During this period, at the suggestion of the minister, health care began to move to new forms of work. A network of diagnostic centers was created, HIV control system was established, legislation on the provision of psychiatric care was revised, new principles of financial and economic activity appeared, a network of children's institutions to reduce mortality of children was created, as well as a system of medical care in extreme conditions, etc. During this period, there was a decrease in maternal and child mortality, an increase in life expectancy, a decrease in mortality from cardiovascular diseases. The World Health Organization, noting achievements of E. I. Chazov in the field of “public medicine”, awarded him the Leon Bernard medal. E.I. Chazov is known in the world as a public figure, an organizer. For five years, together with the famous American scientist B. Lawn of the international movement “Doctors of the World for the Prevention of Nuclear War”, he managed to unite in it tens of thousands of doctors from many countries of the world. The movement played an important role in the formation of anti- nuclear spirits in the public mind and contributed, according to political leaders, to the signing of an agreement on the limitation of nuclear weapons. In 1985, the movement of doctors was awarded the Nobel Peace Prize, which, on behalf of the movement, was accepted by two co-chairmen B. Lawn and E.I. Chazov. The large and productive scientific, therapeutic and social activity of E. I. Chazov was marked by many Soviet and foreign awards. In 1978 E.I. Chazov was awarded the title Hero of Socialist Labor and also he was awarded the Order of Lenin four times. In 2004, E. I. Chazov was awarded the Order for Services to the Fatherland of II degree by the Decree of the President of the Russian Federation, and in 2009 he was awarded the Order for Services to the Fatherland of I degree. For a fundamental contribution to the development of cardiology, by the decree of the Presidium of the Russian Academy of Sciences, E. I. Chazov was awarded the Big Gold Medal of the M.V. Lomonosov Russian Academy of Sciences.

Another recognition of the outstanding merits of Evgeny Ivanovich Chazov in the development of cardiology was the presentation of the Gold Medal of the European Cardiological Society in 2013 at the European Congress of Cardiology in Amsterdam.

Evgeny Ivanovich is the founder of the universally recognized school of cardiology. Among his students are academicians, professors and doctors of sciences, who work not only in the Cardiology Center and various regions of Russia, but also in almost all the former republics of the USSR, Europe and the USA. 32 doctoral and 60 master's theses were defended under the guidance of E.I. Chazov. He is the author of more than 560 scientific works, 21 books and monographs, 6 of which have been translated into foreign languages ​​and published in the USA, Germany, Poland, Yugoslavia.

EI Chazov belongs to the constellation of domestic scientists of a world scale, his contribution to modern cardiology, its forward movement along the path of scientific progress is invaluable, his opinion and authority as a clinician and scientist are of enormous importance and weight in the world cardiological community.

At present, EI Chazov continues his long-term career, he is an honorary director of the Federal State Budgetary Institution "National Medical Research Center of Cardiology" of the Ministry of Health of Russia.