The laboratory was established in 1976.

Laboratory staff takes a part in all scientific works carried out at the RKNPK Ministry of Health of the Russian Federation related to the use of natural peptides, their analogues and conjugates as objects of research tools.

• Development of methods for the synthesis of natural peptides.

• Design and synthesis of physiologically active peptide and its analogues that are resistant to the action of proteolytic enzymes.

• Development of large-scale schemes for the synthesis of peptides, which have found or may be used in medical practice as medicines.

• Together with the staff of other laboratories of NIIEK, the creation of test systems using synthetic peptides or their conjugates.

• Together with the laboratory of cell motility, research is being conducted to create proteolytically stable inhibitors of myosin light chain kinase (MLCK) and to study the relationship between their chemical structure and inhibitory properties. On the basis of the well-known nonapeptide L-PIK (Peptide Inhibitor of Kinase), a number of original peptide inhibitors of CLCM, including cyclic and retro-enantio analogs, were obtained; peptides with modification of the N- and C-terminal amino acid residues; with a reduced amide bond; compounds containing D- or unnatural amino acids. Structures of some compounds are protected by patents of the Russian Federation No. 2402565 of 04/20/2009, No. 2443710 of 10/13/2010, No. 2493164 of 02/27/2012. An original method of solid-phase synthesis of these compounds was developed (RF patent No. 2592282 of 06/29/2016). The stability of peptide inhibitors in human blood plasma was studied using 1H-NMR spectroscopy. The work was continued in the creation of cell-peptide inhibitors of MLCC based on the amino acid sequence fragment of the MLC 11-19 myosin regulatory light chain. MLC 11-19 peptide analogs were synthesized, and the effect of peptide structure modifications on their proteolytic stability was studied.

• Together with the laboratory of cellular immunology, using computer methods for analyzing amino acid sequences of chemotactic cytokines - monocytic chemotactic protein 1 (MCP-1) and the chemokine domain of fractalkine (HDF), original peptide inhibitors and activators of cell migration were found (RF patents No. 2260598 of September 20, 2005 No. 2461565 dated 04/15/2011). On the basis of the peptide fragment (65-76) of the chemokine MCP-1, the drug ingramon has been developed, which has an anti-inflammatory effect in patients with atherosclerosis who have undergone coronary artery stenting. The drug form of ingramon has been developed, its safety has been shown (healthy volunteers). The second phase of the clinical study of ingramon has been carried out. When ingramon is added to the standard treatment for IHD and endovascular interventions, it reduces the likelihood of complications. A method for the synthesis of "Ingramon" (RF patent No. 2340626 of December 10, 2008) was developed. Another fragment of MCP-1 (29-40) is an agonist of this chemokine and, when administered locally, causes the involvement of monocytes, stimulates the formation of granulation tissue around foreign material, increases the rate of wound healing and has a cardioprotective effect when introduced into the infarction zone in experimental animals. The relationship between the chemokinetic properties of the synthesized fragments of MCP-1 and HDF and the status of sulfhydryl groups of cysteine residues in these peptides was revealed.

• Together with the laboratory of experimental pathology of the heart, an original analogue of neuropeptide FF was developed with the code name norgliton (RF Patent No. 2346001 of October 18, 2007) with enhanced proteolytic stability. It is assumed that this analogue can be used in medical practice as a drug, that can stop the shock states associated with a sharp drop in blood pressure. The effect of endogenous neuropeptide FF and its original analogue on the circulatory system, including hemorrhagic shock (RF Patent No. 2403911 of 04/29/2009) was studied.

• Together with the laboratory of immunopathology of cardiovascular diseases, the department of clinical electrophysiology and X-ray surgical methods for treating heart rhythm disturbances of the ECC and the laboratory of immunochemistry of NIIEK, conducted a study on the use of peptides simulating β1-adreno- and M2-cholinergic receptors to detect autoantibodies in patients with disorders of the rhythm and conduction of the heart without signs of organic disease of the cardiovascular system. Based on a computer analysis of the antigenic structure of these proteins, linear peptides corresponding to potential antigenic determinants were selected and synthesized. On the basis of linear precursors, original conformational antigens were obtained. The chimeric molecule that models the extracellular part of the M2-cholinergic receptor (RF patent No. 2502743 dated 12.27.2013) showed a high degree of binding to autoantibodies in the blood serum of patients with idiopathic arrhythmias without signs of organic heart disease. A model bicyclic conformational antigen that mimics the 2nd extracellular loop of the β1-adrenoreceptor also revealed autoantibodies in the patient's blood serum. Its spatial structure was studied using high resolution NMR spectroscopy. It was shown that the experimental and model structures are similar. The coordinates of the NMR structures of this antigen were deposited in the RCSB Protein Data Bank database (www.rcsb.org) under the code 2LSQ.

• A number of original structural analogues of the endogenous peptide Apelin-12, possessing increased resistance to proteolysis and storage stability (RF Patent No. 2457216 dated 07/27/2012) were created in conjunction with the heart metabolism laboratory. Synthesized dodecapeptides improve the recovery of contractile and pumping function of the heart in experimental ischemia and reperfusion, increase the inotropic cardiac parameters in experimental heart failure, improve the metabolic status of the heart during reperfusion, promising for intraoperative protection of the myocardium as components of cardioplegic solutions (RF Patent No. 2549470 from 27.04.2015). One of the analogues of Apelin-12 with the conditional name methylin is chosen to create a drug that improves myocardial contractility in heart failure. A laboratory technology for the production and purification of methylin has been developed.

Laboratory staff are authors of more than 20 patents of the Russian Federation and scientific articles in domestic and foreign scientific periodicals. 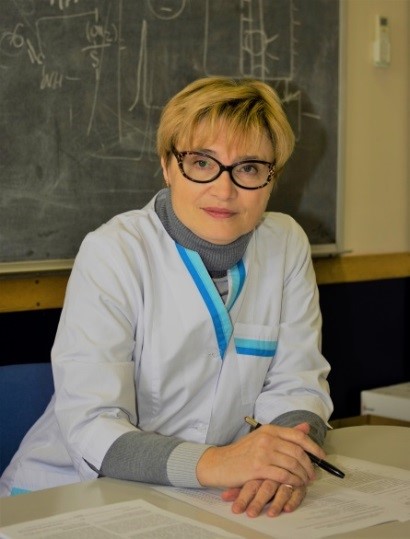